To most Americans, Brazilian music means one thing: the Bossa Nova. But, as a growing number of Som Brasileiro fans know, the music of Brazil is much more. It is sensual, for certain. But it is also as exuberant and passionate as Carnival, as mysterious and haunting as the rain forest, as sophisticated and urban as modern Rio-but wed to it’s primitive roots. 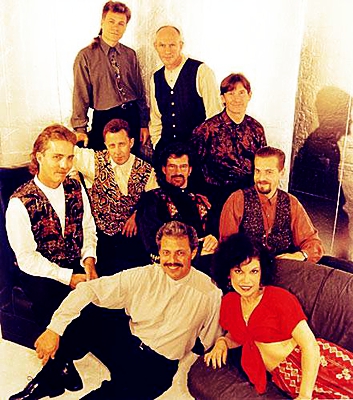 Weaving together diverse trends in Brazilian music, Som Brasileiro (literally “Sounds Of Brazil”) has a voice all it’s own. While it is strongly jazz-influenced, Som Brasileiro’s music also reflects the rich folk/traditional flavor that has made Brazilian popular music unique. The group embraces traditional Samba, Bossa Nova, Brazilian pop music from the Tropicalismo trend of the ’70’s (set by such songwriters as Caetano Veloso and Gilberto Gil) and contemporary compositions from Ivan Lins, Joao Bosco and Milton Nascimento. Paying homage to the music’s literate, complex lyrics, vocalist and group leader Diane Marino sings the repertoire entirely in Brazilian Portuguese, the language in which it was originally written. With great floating rhythms, beautiful melodies and affecting chord progressions, this music is engaging and mysterious–and definitely takes the listener on a journey.

Som Brasileiro is a nine-piece performance and recording group based in Nashville. Their repertoire consists of traditional and contemporary Brazilian Samba and Jazz, all sung in Brazilian Portuguese. Their album SOUNDS OF BRAZIL is released on Odyssey Records and was nominated for the Nashville Music Awards 1998 Jazz Album Of The Year.

What The Critics Say…..

“Brazilian music has been in and out of favor in America ever since the 60’s, when Stan Getz, Charlie Byrd, Astrud Gilberto and company made the bossa nova a pop sensation. There aren’t many Brazilian bands working outside the Eastern seaboard, but Nashvilles’ got a first-rate one in Som Brasileiro. They’ll be playing one show Saturday night at Caffe Milano.  For those fans who’ve recently discovered bossa nova and Tropicalia, it’s a rare chance to hear Brazilian rhythms in a live setting.”
(Ron Wynn/Nashville Scene)

“….Jazz enthusiasts who like a twist to their music are in for a treat….”
(Hot Ticket/Nashville Tennessean)